A new bill introduced this week, SB 351 sponsored by Senator Heidi Seevers Gansert and seven others, would preserve and enhance the Opportunity Scholarship program’s ability to serve income-eligible students by:

SB 321, sponsored by education chairs Denis and Thompson, along with Senators Dondero Loop, Woodhouse, Brooks and Parks. Under the language in the proposal, the ASD’s currently-operating charter schools would have their contracts transferred immediately to the State Public Charter School Authority, and be required to seek approval from one of the state’s other charter school sponsors by July, 2020, or be closed.

The State Public Charter School Authority’s own proposal, AB78, proposes to shift the Achievement School District to within the Authority, while retaining its current statutory functions and systems.

Currently, over 90 percent of students attending current Achievement School District Schools are black or Hispanic and qualify for Free or Reduced-Priced Lunches under federal guidelines. Democracy Prep Agassi Campus, one of these schools, is home to the only four or five star middle school within five miles (the other three ASD schools have not yet received star ratings).

Achievement School District Director Rebecca Feiden is one of three finalists for the current vacancy for Executive Director of the State Public Charter School Authority.

Throughout the near-daily meetings held by Nevada’s legislative education committees this session, it has resonated clearly that our lawmakers are not satisfied with the current state of Nevada’s K-12 education system.

Overall, less than one-third of Nevada’s fourth-grade students are performing at grade-level proficiency in reading, an established indicator for future success. At least as alarming is the reality that two out of five of these students’ classmates show reading skills considered “below basic.” On another crucial indicator, eighth-grade math, students scored at very similar rates in both categories.

These findings came on the 2017 National Assessment of Educational Progress, the program known as “The Nation’s Report Card.”

Nevadans share this dissatisfaction, according to a new poll about how they feel about education and school choice. They want their public schools to improve. And, across a wide range of groups — including ethnic, racial and political party identification — they strongly support school choice programs and want opportunities for their own children to attend schools of choice.

The new poll, published by Nevada Action for School Options and EdChoice and based on scientific polling of 1,200 Nevada adults, offers a number of important insights on how Nevadans feel about their current schooling options.

■ Forty-eight percent of Nevada Hispanics and 34 percent of African-Americans said that if financial cost and transportation were of no concern, they would select private schooling to obtain the best education for their child. This compares with 28 percent who would prefer a regular public school and 22 percent who would prefer a charter school. These rates far exceed the supply of available seats in schools of choice, as only 4 percent of Nevada K-12 students are enrolled in private school today and 10 percent are enrolled in charter schools.

■ More than two-thirds of Nevada’s Hispanics (70 percent), and African-Americans (69 percent) support Nevada’s Opportunity Scholarship program. Support is even higher among parents of school-aged children within these groups.

■ Among parents of school-aged children, 80 percent agree that educational choice initiatives such as the currently unfunded Education Savings Account program, should be available to all families, regardless of their level of household income.

■ Support for Nevada’s public charter schools was also strong, favored by 73 percent of Hispanics and 66 percent of African-Americans.While the poll offered many indications that Nevadans are dissatisfied with the quality of options available to them from their traditional public schools, the answers from respondents reflected an urgency for better options for their children while our system of public education works to improve.

Projections from the Census Bureau suggest that the rapid growth of our state’s school-aged population will continue, and even escalate, over the coming decade.

Our public school systems, and especially Clark County schools, are already showing signs of strain, as evidenced by the many teachers who regularly testify to the Legislature about class sizes bordering on unmanageable. Our schools of choice are one solution that represents a bargain for taxpayers on many levels. This makes their role in Nevada’s education ecosystems an important one, especially given their strong popularity with families.

As Nevada’s public schools persistently rank near the bottom of national studies, one finding from this latest poll offers a bright sign of hope. Nevadans frequently make real sacrifices to support their children’s schooling: The poll found that one-third of Nevadans have moved closer to a desirable school, while three out of 10 have taken an additional job to support their children’s educations.  This stands as an indication that Nevadans care a great deal about school quality.

As our decision-makers deliberate competing budget priorities, new funding formulas and other important factors, they should be mindful that their constituents feel strongly about having diverse school choices to meet their children’s needs.

This article originally appeared in the Las Vegas Review-Journal.

Don Soifer is president of Nevada Action for School Options, a nonprofit organization committed to supporting the growth of diverse educational opportunities for all Nevada students. 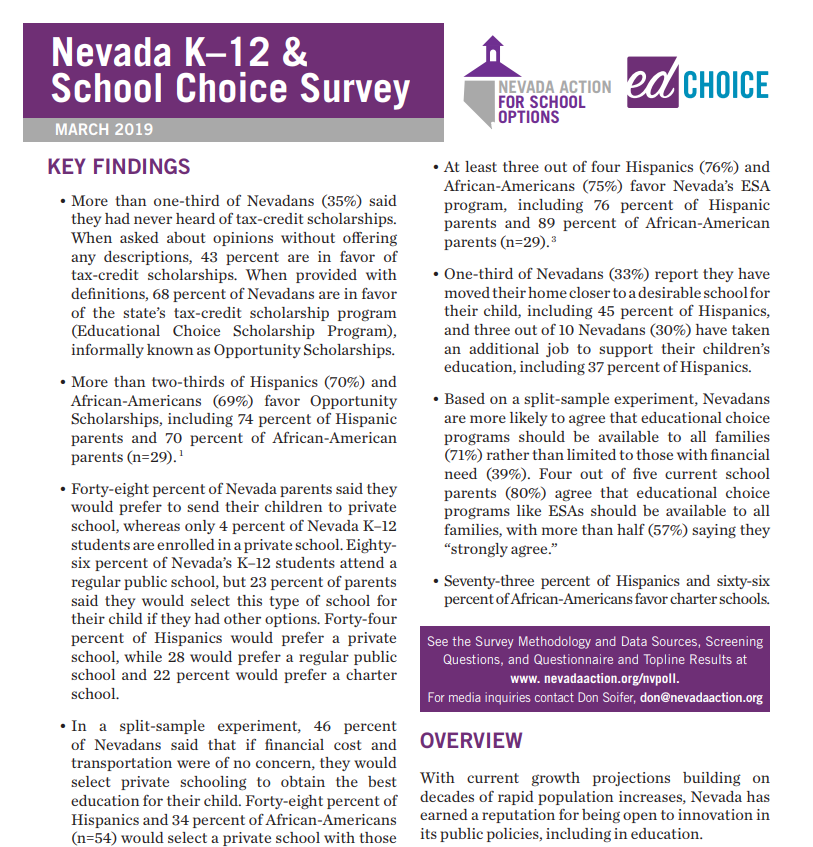 *Click the image above to view full survey findings.