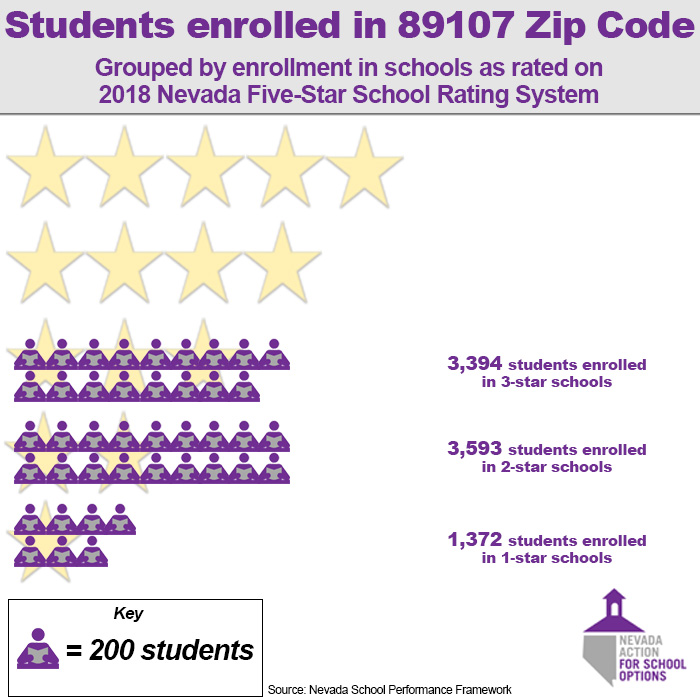 Located near central Las Vegas, the 89107 zip code is another underserved community limited in high-quality school options. The zip code has no schools rating about three-stars – with 59 percent attending one- to two-star schools – as measured by Nevada’s School Performance Framework, which rates school on a five-star rating system.

The median household income in the zip code is $41,501, 80 percent of the Las Vegas median, making it difficult for families to move to find school options around the valley. Forty-seven percent of the population identify as Hispanic. Eight percent of adults 25-years old or older own a Bachelor’s Degree, while 23 percent have attended some form of college but have not or did not finish.

Families in search of high-quality options will likely have to make a significant commute to enroll in a charter school, assuming they secure enrollment into these schools, which often have long waitlists which are resolved by lottery. Also, families eligible to receive private school tuition under the state’s only funded private school choice program may also benefit from luck to overcome a high demand for these scholarships.

It is important to consider other aspects to a school’s performance rating that contribute to its star rating.  For example, schools are evaluated on the growth of their individual students over time in both math and reading. Pittman Elementary School’s performance increased from its 2016 ranking, showing in its English Growth Median Growth Percentile (MGP) compared to the amount of academic growth in reading its students showed compared with students at the same achievement levels in other elementary schools.

Its MGP rated as a 61 – the highest for an elementary school in the 89107 zip code. This number signifies that if  you take a student and compare them to 100 other students who performed at the same level of proficiency, the student at Pittman Elementary is growing faster than 61 of them. According to its growth score, five out of 10 students are on track to be proficient in English within three years, which also ranks among the highest in the zip code.