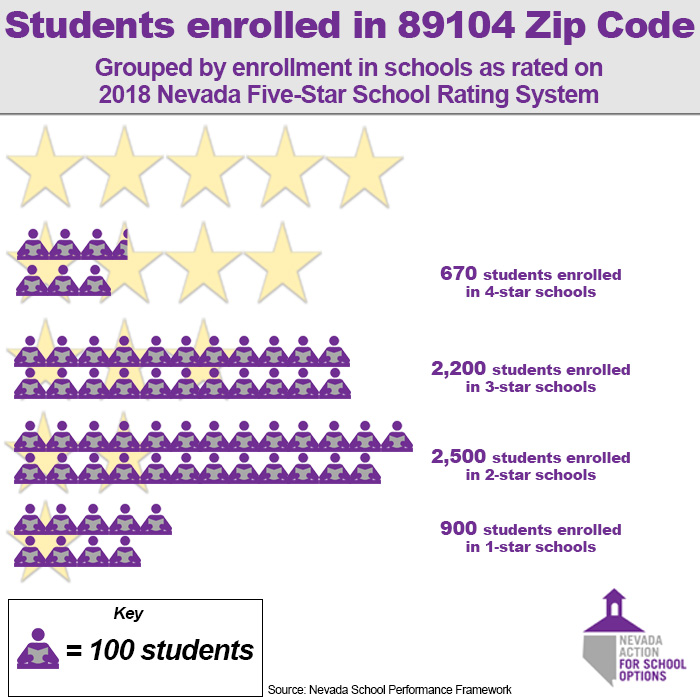 Home to some lower-income communities on Las Vegas’ Eastern side of town, the 89104 zip code hosts one strongly-rated public school amid a limited range of other choices.

The zip code features one four-star school – which is neither a magnet nor a charter – but most (4,700 students) find themselves in two- and three-star schools, as measured by Nevada’s School Performance Framework.

Crestwood Elementary increased its performance from three stars to four stars this past school year, an important indicator of progress.  Driving this gain were strong student growth outcomes in both math and English, both well above the school district average.

The school features a 55 percent English Language Learner population and 81 percent of the students are on free or reduced lunch. Crestwood’s score offer a strong example of why the state’s five-star system promotes equity with a system that shows schools can succeed with a strong score despite low proficiency rates and challenging populations.

According to its latest results, six out of 10 students are on track to be proficient in English within three years, which also ranks among the highest in the zip code.  Crestwood Elementary posted a 64, meaning if you take a student and compare them to 100 other students at the same level of proficiency, Crestwood students will be growing faster than 64 of them. According to the growth score, five out of 10 students from Crestwood Elementary are on track to be proficient in math.

Crestwood participated in the Nevada Department of Education’s Zoom program for the first time during the 2016-17 school year.  Through this program, it received targeted funding for special initiatives for English Language Learners like extra tutoring and services to improve English language proficiency. Crestwood Elementary was one of 31 schools to receive such extra supports from the state.

William Snyder Elementary, a three-star school, posted some strong numbers in terms of MGP. The school posted a 68 and 74 in math and English respectively. The school is on the cusp of becoming a four-star school, thanks mostly to these numbers. K.O. Knudsen — the zip code’s lone magnet school, meaning students must apply, meet any academic entrance requirements and be accepted to attend the school — posted a three-star rating, remaining the same as it did last year.